Shot no.: 6
Song title: The Minute’s Not Up
Style: Stomp/Drum line
Call to Action: Drink while you march! 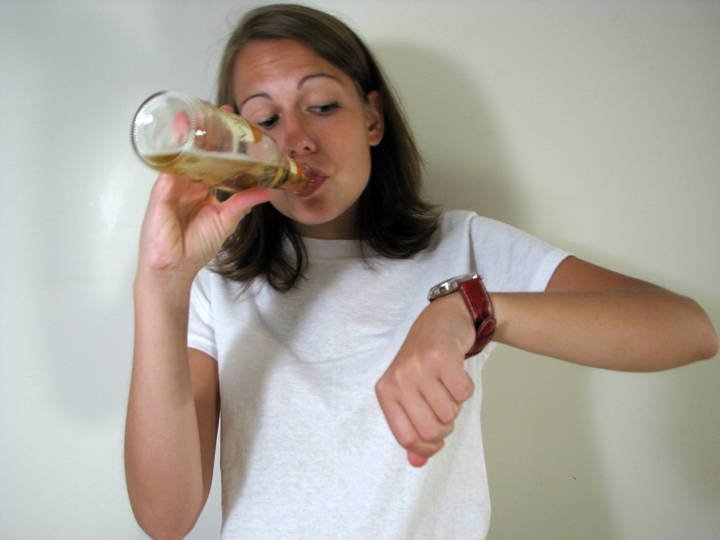 Six minutes into a party is still early. Though at this point you’ve drank over half of your first beer. But for some people this still isn’t fast enough consumption. “Some people” being Nancy*, my friend who actually completes the Game Within the Game. This song was written for her so that she may not feel judged for drinking more than her allotted one shot per minute. Sure some of us are already pouring half shots at this point, (I’ll cover that more in track 44, “Salute to Lightweights”), but others are tough. Or at least think they’re tough at minute six.

So I say, go forth and take those extra sips! Maybe drink some from your friend’s bottle when he’s not looking. Why not throw in a shot of liquor! Well, I could think of a couple of reasons why not. But like I said, no judging. You can break the rules now and drink more. Then break the rules later and stop drinking early. You’ll still win the game!

In the lyrics I mention “a super power half hour and an ultra power quarter hour”. Those are variations on the game where you drink two shots every minute for half an hour or four shots every minute for 15 minutes respectively. I’ve never tried it myself or even seen this done but if it’s on the internet, it must be real.

Have I mentioned that marching bands are awesome? Because they are. Except when your in high school and it’s nerdy. Well look at me now, high school friends! I’m a successful business owner. . . rock star? . . . ok, I’m mostly a drunk. But anyway, being a marching band drummer inspired this killer song style. Hopefully that half a beer in you is enough to loosen you up to rock out and start marching around the party.

Lyrics:
I’m drinking even though the minute’s not up

Two shots, maybe three or four
One a minute doesn’t work for you anymore
I’m drinking even though the minute’s not up